You are here: Home / Brian Caruth 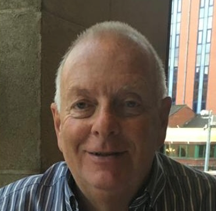 Honorary Life Membership was given to Brian Caruth by Hockey Ireland in 2022. Brian served a term on the Board of the IHU and then two further terms on the Board of Hockey Ireland. In total, he has served 12 years on the Boards and was Chair of the Board for 3 years. In addition, he continues to co-ordinate HI competitions, convene the HI Competitions Committee and Chair the Competitions Committee. As well as being a dedicated volunteer, Brian is a great supporter of all the Irish National teams. He was a supporter even before his son, Peter, was involved with the Irish men’s side. He continues to support the teams now that Peter is no longer involved. In recent years, he has travelled to Rio to support the men’s team in the Olympics, London for the women’s World Cup, Canada for the men’s Olympic play-off, Cardiff for the Men’s EHF World Qualifiers and the indoor internationals against Scotland.