You are here: Home / Carol Metchette 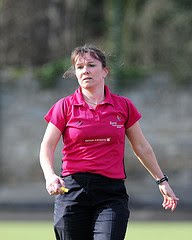 Dublin born Carol Metchette  was introduced to the Hockey Ireland Honorary Members list in 2016. She had a good introduction to hockey when she attended Wesley College where she won the school treble, the ESB Kate Russell All Ireland Schools Championship, Leinster Schools League and Leinster Schools Cup. Metchette, primarily a left back, represented her province Leinster at all levels and played her club hockey with Old Alexandra where she won two ESB Irish Senior Cups, 1988 and 1991. She also won numerous league and cup titles during her playing career with Old Alex.

Metchette started umpiring in a rather casual manner “If the club was stuck I would just go out and help them by umpiring on a Saturday after my own game” she commented. When she retired as a player herself in 2002 Metchette started to umpire on a more regular basis and was appointed at a domestic level to umpire at numerous Cup Semi finals and Finals. Her first international appointment came in 2002 when she was appointed to the U18 Europeans in Rotterdam where she really got a taste for umpiring “it was such a fantastic tournament, it really was enjoyable”.