You are here: Home / Eleanor McNamara 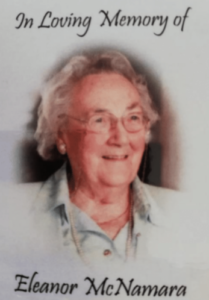 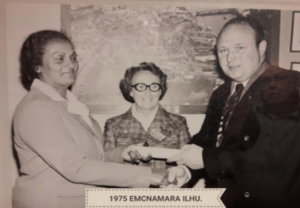 This week-end we commemorated the first anniversary of the death of my mother, Mrs. Eleanor McNamara, of Athlone who passed away aged 100.Eleanor (nee Flynn) along with her 5 sisters was an enthusiastic hockey player and supporter of Loreto Hockey Club over a lifetime. She was instrumental in the development of ‘Ladies’ hockey in Ireland, particularly in Connaught during the fifties and sixties and made many lifelong friendships with her involvement in the sport. Her skills as a voluntary sports enthusiast was recognized, when elected not once but twice as President of the all Ireland, Irish Ladies Hockey Union (ILHU) in 1962/63 and again in 1974/75.

She was a player’s favourite, always encouraging, supportive and advocating for better conditions both on and off the field for them. Her involvement in Hockey administration started locally after relocating to Athlone from Dublin on her marriage to Dr. Jackie McNamara. She regularly coached schoolgirls in ‘Our Ladies Bower’, Athlone and was active in developing Athlone Hockey Club for the community. She frequently collected and drove players to matches, while umpiring many of their fixtures. When elected as Connaught branch President of ILHU in the late 1950s, she focused on introducing hockey to many girls’ schools in the province. This involved visiting schools, encouraging them to take up hockey, helping to source appropriate pitches and equipment as she felt team sports was instrumental in their general development, particularly for girls whose sporting opportunities were not prioritized, and were limited at that time. She donated the ‘McNamara Shield’ for Senior girls Midland school hockey competition, that still is competed for today.

She was honoured to be elected president of the ILHUin 1962/63 and again in1974/75. The latter was a difficult time politically for Ireland and maintaining an‘All Ireland’ sporting organization, which she dearly cherished was challenging. Her diplomatic skills during the 1975 FIH Ladies World Cup hosted by Edinburgh came to the fore, when Ireland had to field a limited squad as they were unexpectedly scheduled for an international match on a Sunday. This resulted in the unavailability of some players due to religious and cultural beliefs. The result and tensions were minimized by the President’s respectful management of the situation, the team securing a vital draw and the re-establishment of a harmonious squad. Her actions were pivotal in maintaining a strong ‘All Ireland’ hockey union, which was under threat. On return from Edinburgh, she invited the Malaysian Ladies Hockey team on tour post their world cup endeavors to play Connaught. She arranged for the Malaysian team to be hosted to a civic reception in Athlone (see photo attached) on their way to Galway for the Match. It was a great honour for Connacht to play such an international team and particularly for her, as her daughter Eleanor, then a school girl, was on the Connaught team.

She became President of Trinity Ladies Hockey Club 1979/80, while supporting Eleanor (junior) throughout her intervarsity undergraduate period. Ever popular with the students, she helped out on many a wet Chilean cup intervarsity, getting gear dried and providing Umpires and Selectors with welcomed hot beverages, then hosting the varsity dinner. It was a great personal joy for her to see Eleanor (junior) gain her firs tinternational Cap, when selected for Ireland against England in Manchester in 1981. After an active and full life, she lived her last year in Cedar House Nursing Home, Mount Anville. She always wanted updates on current Hockey news. She was delighted her grandson Neil McDermott is actively involved in Leinster and Pembroke Wanderers H.C. umpiring. But the thrill to see the Irish women’s team reach the World Cup Final in 2018 was the pinnacle and indeed she had all the residents in the Nursing Home cheering on the team. What an achievement that Kate Russell, Gladys Ruddock, Mum and all their many hard working contempories for hockey would have strove for, but hardly could have believed was possible. It was indeed wonderful that Eleanor lived to enjoy that day. May she rest in peace.