You are here: Home / George Treacy 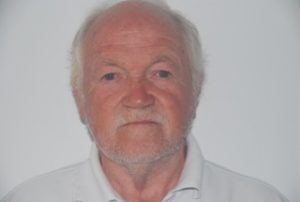 George Treacy began his involvement with the game of hockey at the age of twelve. George became a member of Cork Church of Ireland to join his father and brother Reg. His talent and skill were obvious and played internationally at Schools, U23 and Senior level. His club highlights were 3 Irish Senior Cup medals, 2 Home Country Club Winners Competition medals and a fifth place medal in the European Club Winners Cup.  After a 20 year playing career George turned his attention to Coaching and coached many Munster club  and provincial sides.

In 1981 George became Chairman of the Munster Coaching and Development Committee and member of the National Coaching and Development Committee, becoming chair in 1984. George was involved in a major national coaching conference in Dublin with the world renowned Horst Wien as guest speaker.  National coaches, provincial team coaches, and representatives from schools, colts level, men and women attended this significant conference. From this, coaching courses were held throughout the country for players and coaches at all levels. He believes a new era in Irish Hockey began at this time with the birth of Mini Hockey in Ireland. With the support of the National Sports Council, George designed a Skills Poster and Test Book which was rolled out nationwide at coaching courses.

He became the Irish Women’s Hockey Team coach in 1989 and remained in the position until 1991. While in Holland on a coaching course George met Cees Koppelaar. With the agreement of the executive George invited Cees to become coach to the Irish Senior Men’s hockey team. George also served as Vice President of the Irish Hockey Union for two years.