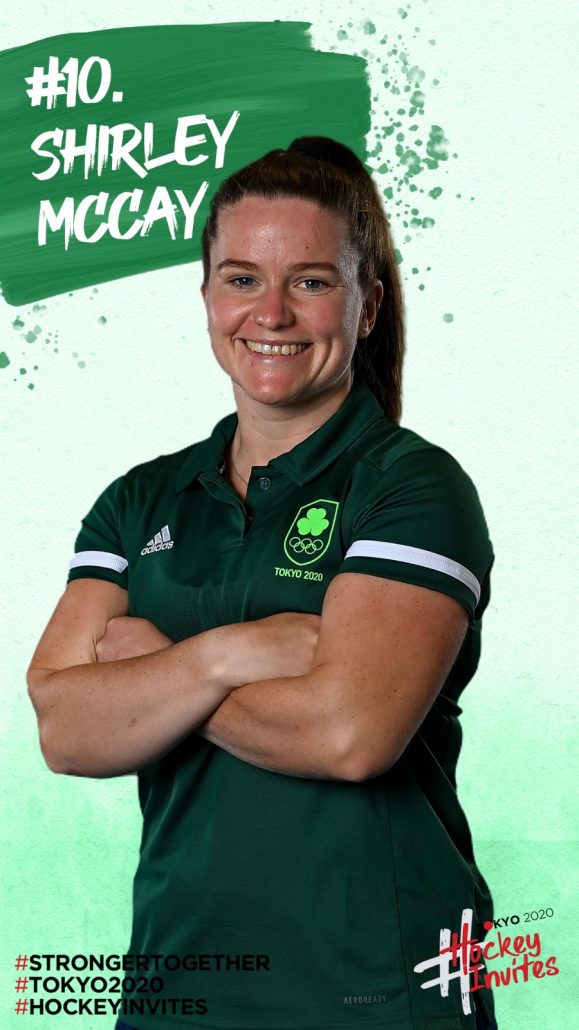 BIOGRAPHY
Ireland’s most capped sportswoman, Shirley McCay was first encouraged to play hockey by her PE teacher, Mary Swann at Omagh Academy. In 2005 she was a member of the Omagh team that won the Ulster Senior Schoolgirls’ Cup and the Kate Russell All-Ireland Schoolgirls Championships.

On the club front, she started off at Randalstown before linking up with Ulster Elks where she had stints, the latter of which brought a pair of Irish Senior Cup titles in 2015 and 2016. That sandwiched a spell in Dublin with Old Alex while she studied a masters in journalism. After Elks, she moved to Pegasus whom she played a key role in their 2018/19 success in the Irish Hockey League.

She made her senior Irish debut in January 2007 against Canada. She captained Ireland in her 100th appearance in April 2011 while her 200th cap arrived in June 2015; she surpassed the Irish caps record previously held by Nikki Symmons (209) later that summer against the Czech Republic. Cap number 250 arrived at the 2017 European Championships in the Wagener Stadium.

On the medals front, she was in the World League Round 2 gold winning sides in 2015 and 2017 and also the 2015 EuroHockey Championship II success.

She had initially indicated the 2018 World Cup run to silver would be the scene of her final international appearance. She excelled, scoring a peach of a goal against the United States and was named player of the match in the pool game against India.

She was tempted back into the fray in 2019 by the lure of one more bid for an Olympic berth which came to fruition at Donnybrook in front of a record-breaking crowd. McCay indicated June’s Euros in Amstelveen woul be her “eighth and last”, putting her in a rare bracket of players in the world to have played so frequently in the continent’s top tier.