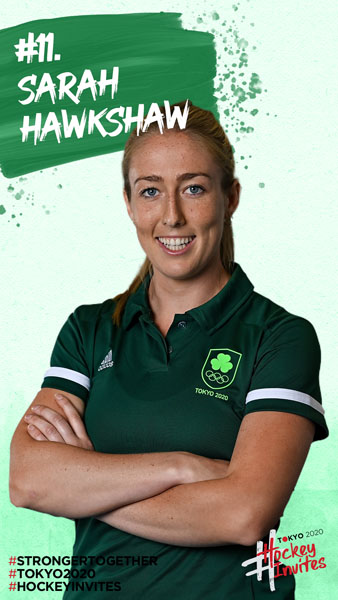 BIOGRAPHY
One of the breakout stars of the team in 2019, Sarah Hawkshaw provides a driving presence, usually down the right flank.

In addition to playing hockey, in her youth Hawkshaw also played Gaelic football for Dublin up to Under-16 level and competed as a cross country runner.

In 2013 Hawkshaw was a member of the Mount Sackville team that won the Leinster Schoolgirl’s Senior Plate final. She scored the winner from a penalty corner as Mount Sackville defeated a St Gerard’s School team featuring Lena Tice 2–1.

Railway Union was her club side and, together with Cecelia and Isobel Joyce, Emer Lucey, Kate McKenna and Grace O’Flanagan, Hawkshaw was a member of the Railway Union team that played in the 2014 EuroHockey Club Champions Cup.

Between 2014 and 2018 Hawkshaw attended the University of Massachusetts on a sports scholarship and gained a BS in Public Health Sciences.

On her return to Ireland, she was soon incorporated into the Irish setup following the World Cup, making her debut in January 2019 against Chile.

She had previously represented Ireland at Under-16, Under-18 and Under-23 levels.

She made her major tournament debut at the 2018–19 Women’s FIH Series Finals and has been an ever-present since then, playing at the 2019 Women’s EuroHockey Nations Championship where Ireland finished fifth, equalling their best ever result, scoring two goals into the bargain.

Her younger brother, David Hawkshaw, is an Ireland under-20 rugby union international and in 2019 he captained Ireland to a Grand Slam.