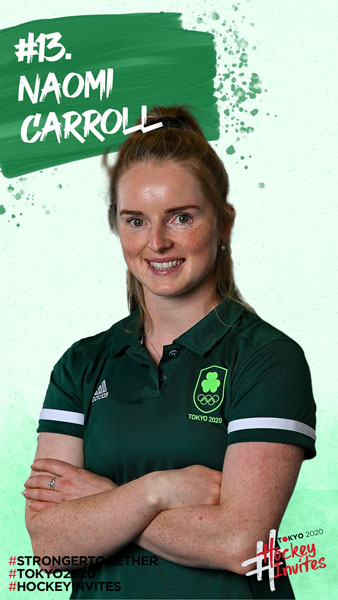 BIOGRAPHY
The multi-talented Cratloe native played her first capped games in June 2021 at the EuroHockey Championships, ending a long joureny since being named as a reserve for the 2018 World Cup. It had been a long and winding road back as she endured an ACL injury when lining out for Clare in ladies football action before starting her hockey recovery with the Irish indoor hockey team in January 2020. In tandem with excellent club form with Catholic Institute, she earned a recall to Sean Dancer’s panel and is in line to add to her 111 caps.

Her sporting beginnings are primarily at Cratloe, playing with the boys teams in hurling and football as the club had no girls section at the time. She played with the likes of Podge Collins and Conor McGrath up until she was Under-16 with the club not allowed field females beyond that age.

On the representative front, she has the quirk of playing for both Clare and Limerick. As Cratloe had no girls teams, she played camogie for Na Piarsaigh and earned a call-up to the Limerick county side as a result, playing alongside Roisin Upton at times. She also won the 2013 Munster Ladies Senior Club Football Championship with Clare and played in the 2010 All-Ireland minor camogie final.

Hockey came later in her sporting life, taking up the game at the age of 14. She says she “initially hated it” but stuck at it and rose quickly to play in Irish underage teams and made her debut six years later. Her club career started at Catholic Institute before moving to Dublin and a successful stint with Hermes, winning the Irish Hockey League and EY Champions Trophy. And she was a near ever-present in the international golden period between 2014 and 2017 which garnered the Champions Challenge silver medal in Glasgow, golds in World League events along with the European second division in 2015. Her comeback came at the Euros this summer and she scored the only goal in a 1-0 win over Scotland.