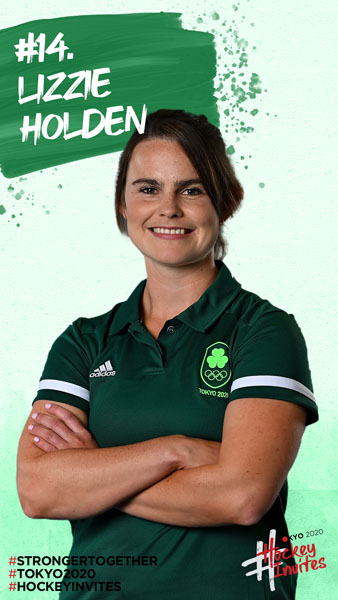 BIOGRAPHY
A product of the remarkable era at Armagh Hockey Club – under the tutelage of current Irish assistant coach Mick McKinnon – Colvin was part of a side who won six successive promotions, going from the seventh tier of Ulster hockey to the very top. This was all while still in her teenage years and under the coaching of Mick McKinnon who is now one of the Irish assistant coaches.

She moved to Dublin and Trinity for college, playing her club hockey for Loreto with whom she won the inaugural Women’s Irish Hockey League title. The midfield dynamo was also a member of the Loreto team won the 2009–10 Irish Senior Cup alongside fellow internationals Nikki Symmons, Hannah Matthews, Ali Meeke and Nicola Daly.

She spent one season in the Netherlands with HGC while on Erasmus before returning to Ulster and Belfast Harlequins in 2017, linking up with Zoe Wilson and Barr twins Serena and Bethany.

Her senior debut came in June 2008 against France in the Celtic Cup and she has amassed 201 caps since then, becoming just the seventh Irish woman to do so. The big gap in that was between August 2013 and January 2015 when she was recovering from an anterior cruciate knee ligament injury.

She was back in time to win gold at World League Round 2 in March 2015, beating Canada in the final and she helped repeat the feat in 2017, beating Malaysia 3-0 in that final. Her most famous goal is the one that ultimately got Ireland to the 2018 World Cup, scoring the winner in a 2–1 win against India. Ireland’s seventh-place finish in at the tournament eventually saw them qualify.

Colvin represented Ireland at the 2018 Women’s Hockey World Cup and was a prominent member of the team that won the silver medal. She featured in all of Ireland’s games.

Between 2014 and 2016 Colvin worked as a trainee solicitor with A&L Goodbody in Dublin. After qualifying as a lawyer in 2017 she began working as an employment law specialist with DWF in Belfast.