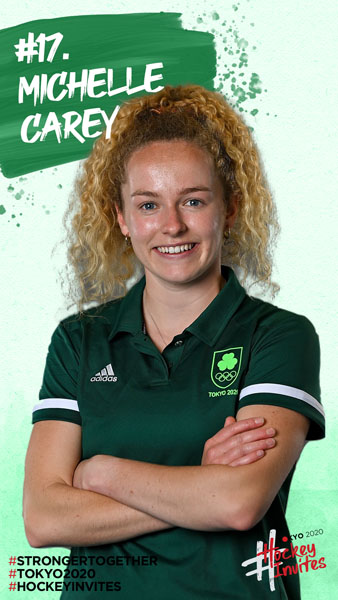 BIOGRAPHY
Michelle Carey made her formal international debut at the EuroHockey Championships against the world number one side the Netherlands in front of their home crowd at the Wagener Stadium in June. She was an ever-present in that competition, playing a part in midfield and up front in all five games.

It is a far cry from this time last year when Carey’s main focus was on the Dublin Junior A ladies football championship with Ballinteer St John’s, whom she helped to that particular trophy.

Last September, however, she starred in the Irish Senior Cup final for UCD as they saw off Pegasus to win the delayed 2020 final. Around the time, she was invited by Sean Dancer to train with the Irish senior setup on an ongoing basis having dipped in and out of the squad.

She previously played for Ireland – alongside her twin sister Niamh – at all underage levels, doubling up with spells with the Dublin ladies football youth teams.

Her career veered toward hockey at the age of 16 with the European Under-18 championships in Cork taking her focus as she decided to step away from the Dublin minor panel. In 2021, she played her first senior international games in January in an uncapped series against Spain. Her uncle is GAA President Larry McCarthy.