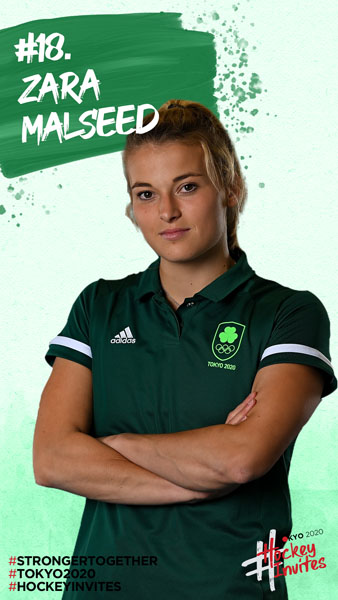 BIOGRAPHY
The Ards striker said earlier this year she is taking “everything as a win” following her hugely impressive first year as part of the Irish senior women’s panel following a meteoric rise. She made her debut in the fourth game of June’s EuroHockey Championships in Amstelveen against England and scored her first international goal a day later against Italy in a 3-0 win.

Prior to that, the Ulster woman showed her goalscoring instincts when she netted three times in three appearances against Spain in Murcia in January despite breaking her thumb in the second game, continuing her incredible rise from obscurity to genuine contention for an Olympic spot.

An Irish Under-18 international six years ago, her move to Edinburgh for university was far from an instant success as she found herself dropped to the second team in her second year.

It is why she considered international hopes “were a dream I thought were dead a long time ago” before a remarkable rise. It started in Scotland with a first team recall leading to captaincy and then a domestic club treble for Edinburgh University.

Since returning to Ireland, she netted over a goal a game for her original club, Ards, who have the added benefit of Irish assistant coach Gareth Grundie in their setup, witnessing her exploits first-hand despite playing outside the top tier EY Hockey League.

That got her foot in the door in February 2020 with an invite for trials but last March’s abrupt hiatus came at the right time to allow her to focus on building the physical side. And it provided Irish coach Sean Dancer with extra justification for her inclusion in Ireland’s carded panel of 23 for 2021.