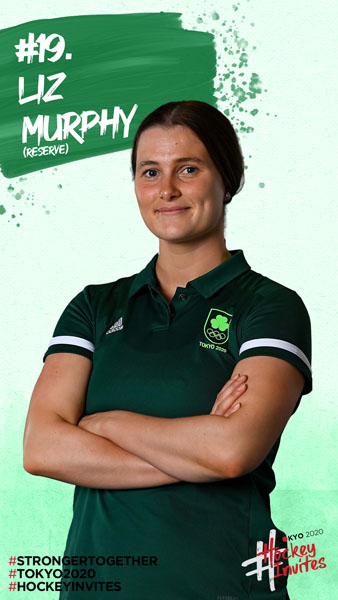 BIOGRAPHY
Lizzie Murphy will travel to Tokyo as the reserve goalkeeper, waiting in the wings as Ayeisha McFerran’s understudy. She forced her way into the reckoning in 2019 and has been the second goalkeeper at the 2019 and 2021 EuroHockey Championships as well as the Olympic qualifiers against Canada.

She saw pitch time in one of the games in that Euro tournament in Antwerp in 2019, backing up her impressive performances across the 2017 and 2019 Junior European Championships for the Irish Under-21s.

Her hockey history saw her develop at Hermes and at St Kilian’s and she is the first past pupil from the school to play senior international hockey. She attended the school from kindergarten right up to Leaving Certificate.

On the club front, she has played in a series of European club competitions, contesting the 2017 EuroHockey Club Cup in Den Bosch with Hermes-Monkstown, the 2018 Euro Trophy in Dublin with Monkstown and then the Cup again with Loreto in 2019, giving her a taste of the atmosphere at the Wagener Stadium.