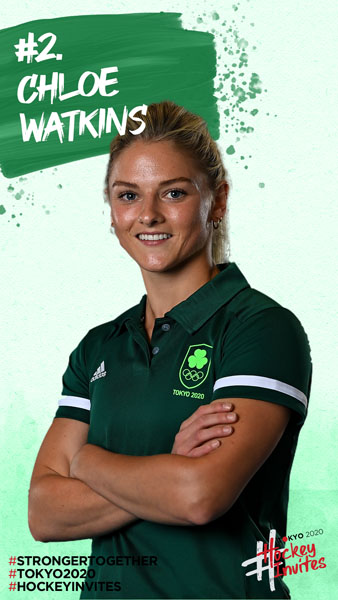 BIOGRAPHY
Ireland’s second most capped women’s hockey player, the Monkstown woman is the creative engine for the Green Army. Hailing from a famous hockey family, her father Gordon and brother Gareth also played for Ireland but not nearly to the same extent as Chloe. As such, much of her youth was spent going down to Monkstown to watch her brother – Gareth, also an international – in action and she was itching to hit the turf. At St Andrew’s College, she played in four Leinster Schoolgirls’ Senior Cup finals, winning the 2006 as a 13-year-old, scoring a goal against Loreto Beaufort to win 2-0. They beat the same opposition in the 2009 final and, in 2010, Chloe captained St. Andrew’s as they defeated an Alexandra College team that featured Deirdre Duke and Emily Beatty. For good measure, they added the Kate Russell All-Ireland Schoolgirls title with a 3-1 win over Coláiste Iognáid, Galway 3–1 in the final.

In 2008, while still a 16-year-old schoolgirl, Watkins, together with fellow schoolgirls, Anna O’Flanagan and Nicola Evans, was a member of the Hermes team that won the All-Ireland Ladies’ Club Championships. She began playing for UCD in 2010–11 and she won an Irish Senior Cup in her second season before doing a Spanish double while on Erasmus with Club de Campo de Madrid. 2015 saw a return to the now amalgamated Hermes-Monkstown along with Anna O’Flanagan and Nikki Evans, winning the Women’s Irish Hockey League title and the EY Champions Trophy. Together with O’Flanagan, she spent the 2017–18 season playing for HC Bloemendaal in the Hoofdklasse in the Netherlands. They were coached by former world player of the year Teun de Nooijer and they helped Bloemendaal win the Gold Cup.

Internationally, she made her debut for Ireland, aged 18, in July 2010 against Scotland, just a month after completing her Leaving Cert.  Highlights include a 2012 Champions Challenge bronze, bettered two years later by a silver in 2014 in Dublin. World League Round 2 gold came in 2015 and 2017. During the 2018 World Cup silver medal run, Watkins scored twice in shoot-outs. In the quarter-final against India she scored the winning effort to send Ireland through to the semi-final. She also scored in the shoot-out in the semi-final against Spain. In the final against the Netherlands, Watkins made her 200th senior international appearance for Ireland. And her prowess in shoot-outs continued to the Olympic qualifiers in 2019 when she coolly slotted her effort on the backhand to keep the contest alive against Canada, leading to that famous “Watkins wink” directed at goalkeeper Ayeisha McFerran.

Watkins revealed last summer that she had undergone surgery after she experienced heart palpitations at a training camp in South Africa. She says she was lucky to have caught it in time with the elective surgery likely to have been put on hold had it been during lockdown time.