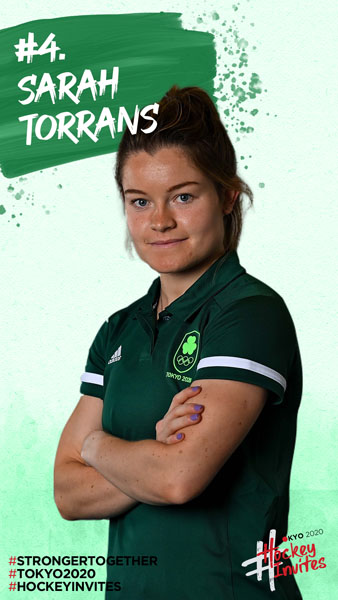 BIOGRAPHY
Knocklyon’s Sarah Torrans is looking forward to finally getting her major international debut after a series of close-run things in recent years.

In 2018 as a teenager, she came within a whisker of being part of the World Cup silver medal winning squad after a whirlwind beginning to life as a senior international. Her gorgeous strike against Japan in one of the last warm-up games brought her to the brink of selection, ultimately named as one of three reserves alongside Emily Beatty and Naomi Carroll.

Her brief, though, was a watching one – featuring in RTE’s fan clips from the Glenside in Churchtown with many of her Loreto club mates – before getting to rejoin her Irish team mates on the Dame Street stage for the silver medal homecoming.

Since then, though, she endured a frustrating 2019. She was due to captain the Irish Under-21s at the Junior European Championships but a freak injury 10 days out for the tournament ruled her out of not just that event but, also, contention for the Euro seniors a month later.

Torrans was also initially named in the Irish panel for this summer’s European Championships but a late injury ruled her out but she has worked her way back to fitness to get this chance.

Her initial sporting history started with Corinthian Hockey Club’s hugely impressive youth section which she took in alongside life as a sprinter with Dundrum South Dublin Athletics Club. She won numerous national medals, notably helping to break a national Under-16 4x200m relay record. She frequently competed against the likes of Ciara Neville and Sharlene Mawdsley on this stage.