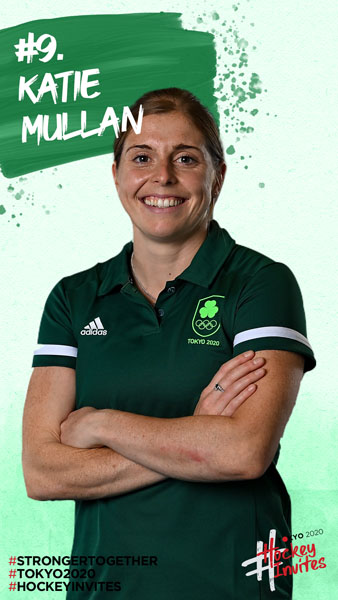 BIOGRAPHY
Ireland’s captain since 2016, the Coleraine woman’s beaming smile in the pre-match ceremonies was a feature of the Green Army’s joyous run to World Cup silver in 2018. Her sporting origins came initially in camogie for CLG Eoghan Rua with whom she was a member of the team that won the 2010 All-Ireland Intermediate Club Camogie championship, beating Laois Harps 3–8 to 2–3.

On the hockey front, she was brought into the sport at Dalriada School where her PE teacher and hockey coach was Bridget McKeever, a former Ireland women’s field hockey international. She also played for Ballymoney and rose through the Irish underage ranks.

Mullan took over as Ireland captain from Megan Frazer, who was kept out of the side through injuries. She remained captain throughout Ireland’s 2018 Women’s Hockey World Cup campaign, leading them to the silver medal.

Away from the field, Mullan used the time created by the delayed Olympics to develop her work as a visual engineer with Axial 3D, creating PPE and medical supplies solutions to aid the fight against Covid-19