You are here: Home / Rita Parsons 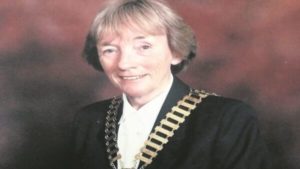 Rita was a member of Railway Union HC for over 50 years.  Rita’s contribution to Railway Union Hockey and Sports club was immense from joining the club in the late 1940s until she passed away in 2017 she was an ever present figure. There is a great story of when she was looking to join a hockey club and how she took the wrong turn ending up in Railway Union instead of Pembroke Wanderers.  She was known and loved by many generations of people all over the country, having played hockey for the Railway women’s first team and also represented Leinster. She captained Railway women’s seconds to the Irish Junior cup in the 1970s and was renowned as a tough and fearless goalscorer.