You are here: Home / Ronnie Smyth 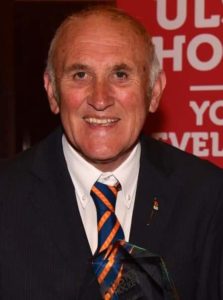 Hailing from the Holylands, Ronnie’s love of sport started on the football pitch with Linfield Youth team and on the hockey pitch with Annadale Hockey Club. As both a teacher and sports coach Ronnie began to impact positively on the lives of young people in our community where he managed teams in both basketball and hockey. Ronnie managed the first Irish Boys International Hockey team and coached at Ulster and Ireland levels. Ronnie was awarded his Hockey Ireland Life Member pin in 2016.

Ronnie has been an integral figure in Annadale Hockey Club since its foundation and the club can look to Ronnie’s commitment and devotion which was a driving force behind AHC becoming one of Ireland’s leading men’s clubs. Ronnie played and coached Annadale and was central to the formation of the junior system at the club which has produced a large number of international players.

Professionally, following his teaching career, Ronnie’s love of sport and impact on developing sport systems led to him being employed by the Sports Council Northern Ireland (now Sport NI). In a long and distinguished career his input contributed to the success of sport in the region at all levels.

In 2022, Ronnie was deservedly recognised by Queen Elizabeth II in her Jubilee Honours list where he received a British Empire Medal for his services to hockey and youth sport.

To many, Ronnie is thought of as ‘The Godfather of Ulster Hockey Coaching’. Ronnie was a genuine legend of local sport and it is no exaggeration to say the sport of hockey and Ulster Hockey would not be where it is now without Ronnie’s involvement. The number of hockey players past and present, at all levels of the game who were inspired by Ronnie is almost impossible to quantify.

Ronnie was great coach, a committed hockey man and a gentleman. Above all, he was also a husband, father and grandfather.