You are here: Home / Hockey Ireland

Hockey Ireland is the National Governing Body (NGB) for the sport of field hockey in Ireland. Governing the 32 counties of Ireland, the NGB is responsible for the management and overall development of all areas of the sport.

The Irish Hockey Association was formed in May 2000, as a result of the merger of the two pre-existing Unions which governed men’s (Irish Hockey Union) and women’s (Irish Ladies Hockey Union) hockey separately. The merger came about after the International Hockey Federation declared in 1998 that each national member must be governed by just one organisation.

The Irish Hockey Union (IHU) was founded on 6 February 1893, following a meeting at the Wicklow Hotel. A year later, the Irish Ladies Hockey Union (ILHU) was established in 1894, following a meeting at Alexandra College. The IHU joined the International Hockey Federation (FIH) in 1950. The ILHU was a founding member of the IFWHA (International Federation of Women’s Hockey Associations) set up in 1927.  The IFWHA joined forces with the FIH in 1982.

At the 2013 AGM a motion was passed to become a Limited Company. 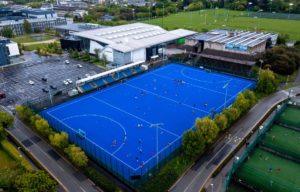 Hockey Ireland and its forerunners – the Irish Ladies Hockey Union and the Irish Hockey Union – have enjoyed a strong partnership with UCD for nearly 30 years.

The sport’s governing body set up its home at Belfield in the early 1990s as part of its centenary celebrations with the construction of the purpose-built National Hockey Stadium on the premises of the south Dublin university. This development came in time for the hosting of the women’s World Cup in 1994 and the men’s European Championships a year later in 1995.

The Belfield venue also welcomed the 2005 women’s Europeans before setting the stage for the sold-out Olympic qualifiers in 2012 when President Michael D Higgins was on hand to witness the ultimately heart-breaking London bid with Korea cruelly denying the Green Machine a ticket with seven seconds left on the clock.

These are many highlights alongside numerous other World League and Champions Challenge events.

Since the 90s, Hockey Ireland have been long-time office residents in the nearby Newstead building, providing a close link between the two bodies 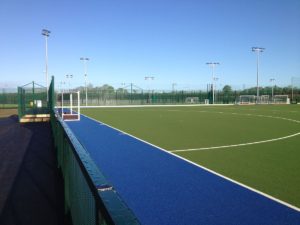 In more recent years, Hockey Ireland uses a purpose-built facility at the Sport Ireland Campus in Abbotstown which was built in the wake of the Irish women’s 2018 World Cup silver medal courtesy of the generous support of Sport Ireland and the Irish government.

The new pitch was constructed by Sport Ireland with day-to-day management of the facility the responsibility of the Sport Ireland National Sports Campus operations company.

This hockey pitch facility is now home to the Ireland hockey teams to prepare for international games and events and this elite-level facility is also available to the public to fulfil their own requirements.