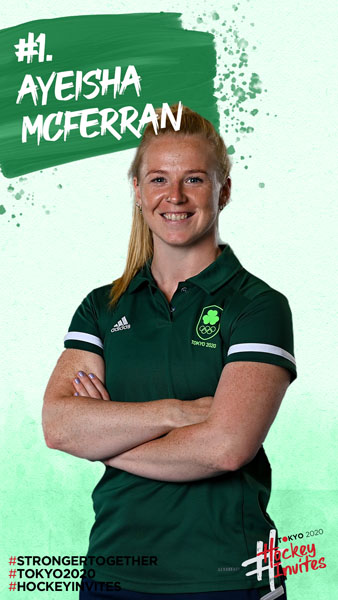 One of world hockey’s best last lines of defence, the Larne woman was named Goalkeeper of the Tournament at the 2018 World Cup and nominated for the FIH World Goalkeeper of the Year on two occasions. She became the second goalkeeper from Larne to line out for Ireland after Anne Laing who was the number one between 1961 and 1974. McFerran took up the game aged seven and was still a pupil at Larne Grammar School when she made her senior debut for Ireland. In addition to playing field hockey, in her youth McFerran was an Irish dancer and played the flute.

Randalstown was her club side when she made her senior debut before switching to Pegasus for one season, winning the Irish Hockey League in 2015. She was also named as the league’s best goalkeeper. Next on the agenda was a move to the Louisville Cardinals with former Dublin-based man Lucas Piccioli scouting out her talents. Between 2015 and 2017, she was named three times as an NFHCA All-American. On completion of her studies in the US, Dutch outfit SV Kampong came calling.

For Ireland, McFerran made her senior debut for Ireland against Spain on 11 January 2014, the day after her 18th birthday. At that stage, she was largely deployed as a shoot-out specialist, replacing Emma Gray for the endgame of the 2015 World League Round 2 final against Canada and coming up trumps. She would reprise that role in a shoot-out against China with Olympic qualification on the line last summer in Valencia but the efforts came up just short. She was also a member of the Ireland team that won the 2015 Women’s EuroHockey Championship II, defeating the Czech Republic 5–0 in the final.

In January 2017 she was also a member of the Ireland team that won a 2016–17 Women’s FIH Hockey World League Round 2 tournament in Kuala Lumpur, defeating Malaysia 3–0 in the final.

At the 2018 World Cup, she conceded just three times in five games leading up to the final, including a shoot-out semi-final win over Spain. And her most recent shoot-out heroics came in the 2019 Olympic qualifiers following back-to-back clean sheets against Canada in normal time.