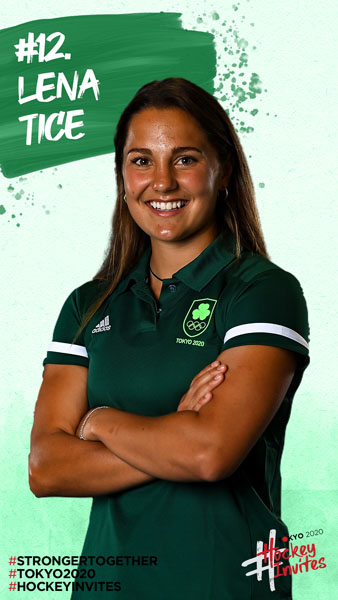 BIOGRAPHY
A cricket international at the age of 13, a World Cup silver medallist at 20, Lena Tice’s career is already an extraordinary one with plenty of miles still to run.

In 2011 she made her senior international cricket debut, aged just 13 years and 272 days. As a result, after Pakistan’s Sajjida Shah, Tice became the second youngest player in the history of cricket, male or female, to make their international debut playing in an official One Day International or Twenty20 International. She also represented Ireland at the 2014 ICC Women’s World Twenty20 and appeared 60 times for Ireland all told. Along with Louise McCarthy, she holds the record for the highest tenth-wicket partnership in a Women’s Twenty20 International, with an unbeaten 23 runs. She made her last WODI appearance for Ireland against South Africa on 14 January 2014 and her last WT20I for Ireland against Australia on 22 August 2015.

Hockey-wise, she was the star of St Gerard’s ground-breaking schools team, scoring their winner in a 1-0 win over Alexandra College in 2015 to win the Leinster Schoolgirls’ Senior Cup final.

After a couple of seasons with Loreto, she linked up with Deirdre Duke, Gillian Pinder and Katie Mullan as a member of the UCD team that won a treble during the 2016–17 season, winning the Irish Senior Cup, the Irish Hockey League  and the EY Champions Trophy. Tice played a crucial role in securing the league title for UCD when she scored two penalty corners to inflict a first league defeat on Hermes-Monkstown. The result saw UCD overtake Hermes-Monkstown on the final day of the campaign. Tice also helped UCD retain both the Irish Senior Cup and Irish Hockey League titles during the 2017–18 season.

Internationally, Tice represented Ireland at Under-16 and Under-18 levels before making her senior debut on 3 November 2015 against Scotland. At the time she was only 17 and was still a student at St Gerard’s. Coach Graham Shaw would famously recall she texted him to say she was available for the Hawkes Bay Cup in New Zealand despite its proximity to her Leaving Cert.

In January 2017 she was a member of the Ireland team that won a 2016–17 Women’s FIH Hockey World League Round 2 tournament in Kuala Lumpur, defeating Malaysia 3–0 in the final and she has been an ever-present at the 2017, 2019 and 2021 Euros as well as the 2018 Women’s Hockey World. In the wake of that silver medal success, she went on to win medals in both the Australian Hockey League and New Zealand Hockey League.