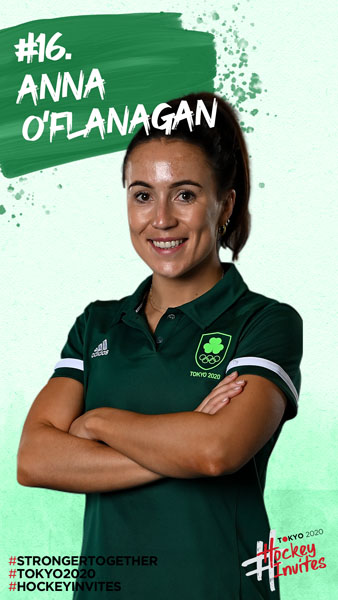 BIOGRAPHY
Anna O’Flanagan is Ireland’s all-time record goalscorer with 83 goals to her name from her 212 international caps along with a series of other accolades.

In 2008, when still a schoolgirl at Muckross Park College, O’Flanagan was a member of the Hermes team that won the All-Ireland Ladies’ Club Championships. Her teammates at Hermes included Chloe Watkins, Nikki Evans, and Deirdre Duke.

Her switch to UCD brought plenty more trophies with 2012 and 2014 Irish Senior Cup crowns to go with a 2014 Irish Hockey League, scoring the winner in that 2012 3-2 victory over Loreto. O’Flanagan scored again in the 2014 final as UCD defeated Pembroke Wanderers 2–0. Her club-mates in UCD included Katie Mullan, Gillian Pinder, Deirdre Duke, Evans and Emily Beatty.

Along with Watkins and Evans, she joined Hermes-Monkstown in 2015 and they won the Women’s Irish Hockey League title and the EY Champions Trophy. In the EY Champions Trophy final, O’Flanagan scored twice in a 3–1 win over Pegasus. A two-year spell in the Netherlands followed, taking a break from her legal career to prepare for the 2018 Women’s Hockey World Cup. Her first year – coach by former world player of the year Teun de Nooijer – culminated in a Gold Cup win with HC Bloemendaal.

Internationally, she debuted in July 2010 against Scotland and her first goal arrived in April 2011 against France. Her trophy list features the 2015 and 2017 World League Round 2 golds while 2014 Champions Challenge silver is another highlight. Her 100th appearance came in May 2015, scoring in a 3-1 win against Canada.

She scored 12 goals at the Kuala Lumpur World League tournament, including one in the final, which saw her pass the 50 mark.

Her goalscoring ways continued into the World Cup. On 26 July 2018, she scored in the group game against India, securing a 1–0 win for Ireland and a place in the quarter-finals. On 4 August 2018 she also scored in the semi-final against Spain. This was her 65th international goal which saw her become Ireland’s joint all-time top scorer, along with Lynsey McVicker. She was subsequently named player of the match.

2019 saw her land the Player of the Tournament gong at the World Series Finals in Banbridge and she was on Ireland’s top scorer at the 2019 (joint-top) and 2021 Europeans.