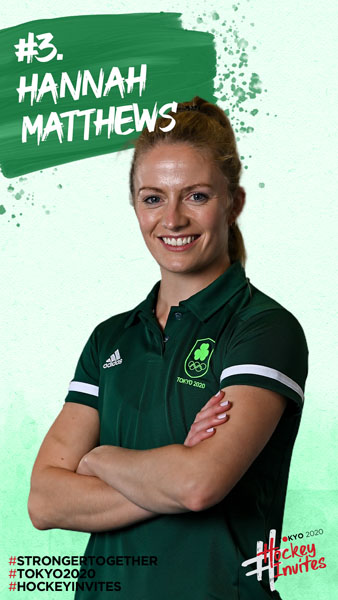 BIOGRAPHY
A model of defensive consistency, Hannah Matthews is something of a rarity in the panel as a “one-club” player, lining out for Loreto following her successful school days at Loreto Beaufort, scoring the winning goal in the Leinster Schoolgirls Senior Cup final in 2008 in a 2-1 success against Alexandra College. In the 2009 final Matthews captained Loreto, Beaufort as they faced a St Andrew’s team featuring Chloe Watkins and Gillian Pinder. This time, St Andrew’s won 2–0 after extra time.

With Loreto, she won the inaugural Women’s Irish Hockey League title in 2009 and, a year later, took the Irish Senior Cup final win against Railway Union; Matthews scored the winning penalty stroke after the game had finished 2–2 in normal time.

Continuing a habit of scoring on big stages, Matthews also scored for Loreto in the 2011–12 cup final but this time they lost 3–2 against UCD. In June 2011, she scored in the EuroHockey Club Champion’s Challenge II final as Loreto defeated HC Olten of Switzerland 7–1. In 2014 she captained Loreto to third place at the European Club Championship Trophy tournament hosted by Leicester Hockey Club. And in May 2018, Matthews captained Loreto as they won the EY Champions Trophy.

Her international career started at Mori in Italy in June 2014 having previously represented Ireland at Under-18 level. In March 2015 Matthews was a member of the Ireland team that won a 2014–15 Women’s FIH Hockey World League Round 2 tournament hosted in Dublin, defeating Canada in the final after a penalty shoot-out. That summer, she also won gold at the Women’s EuroHockey Championship II, defeating the Czech Republic 5–0 in the final but Olympic qualifying in Valencia proved tantalisingly out of reach.

She was also a member of the Ireland team that won a 2016–17 Women’s FIH Hockey World League Round 2 tournament in Kuala Lumpur, defeating Malaysia 3–0 in the final. In June 2018, Matthews made her 100th senior international appearance for Ireland during a series of games against Canada.

Matthews represented Ireland at the 2018 Women’s Hockey World Cup and was a prominent member of the team that won the silver medal and she passed the 150-cap mark at the 2021 Euros. She is the daughter of Phillip Matthews, the former Ireland rugby union international, and his wife, Lisa Flynn. Her maternal grandfather, Kevin Flynn, was also an Ireland rugby union international.