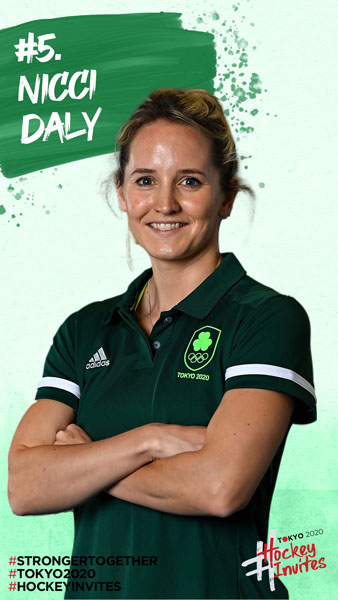 BIOGRAPHY
Motorsport was the sporting outlet of choice long before hockey came into Daly’s life. Her father Vivion was a former Formula Ford racing driver while her uncle Derek Daly is a former Formula One driver; Nicci’s first cousin Conor Daly, the IndyCar driver. In addition to playing Gaelic football and hockey, Daly spent many weekends during her youth at Mondello Park watching her father compete. And she carries that passion through to this day, working as a data engineer with motorsport teams while she attended the School of Applied Sciences at Cranfield University where she gained an MSc in Motorsport Engineering and Management.

Daly represented Dublin ladies footballers at under-14 level alongside Lyndsey Davey and she made her debut for the Dublin seniors in 2009. She learned her hockey initially at The High School in Rathgar alongside fellow World Cup silver medallist Ali Meeke. She did not play in a club until Graham Shaw – the 2018 World Cup coach – suggested she link up with Glenanne in 2008 where she scored on debut. The next season, she again linked up with Shaw at Loreto who won the 2010 Irish Senior Cup. After spells with Holcombe in England and Muckross, Daly re-joined Loreto for the latter half of the 2017–18 season. She subsequently scored the opening goal as Loreto defeated Cork Harlequins 2–1 to win the 2018 EY Champions Trophy.

Her senior Irish debut came in 2010 against Belgium and she played her part in World League Round 2 gold medal wins in 2015 and 2017 as well as Euro B division gold in 2015. In that same 2015 summer, she scored a contender for Ireland’s best ever goal in a victory over South Africa in the 2016 Olympic qualifiers. Daly represented Ireland at the 2018 Women’s Hockey World Cup and was a prominent member of the team that won the silver medal. She featured in all of Ireland’s games throughout the tournament.

In interviews, Daly has revealed how Mariah Carey’s All I Want for Christmas Is You became the team’s unofficial theme song. Daly explained that some of the younger members of the team had said that the excitement and anticipation they experienced during the tournament “felt like Christmas Eve.” The team subsequently began singing the song during training sessions and again during their homecoming celebrations.

Just two weeks after playing for Ireland in the 2018 World Cup final, Daly made her debut as a motor racing driver at Mondello Park. Daly drove as part of the Formula Female team in an event celebrating the track’s 50th anniversary. She also co-founded the team. Daly was raising money for the Irish Cancer Society in honour of her father who had died of cancer on 15 November 2002, aged 48.