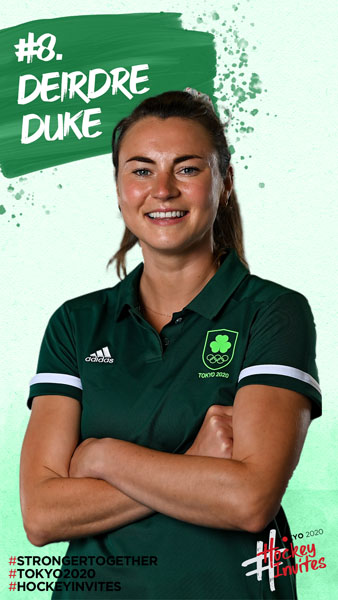 BIOGRAPHY
In addition to her hockey exploits, the multi-talented Deirdre Duke also won an All-Ireland Under-14 Ladies’ Football Championship with Dublin and represented the Republic of Ireland women’s national under-17 football team where her international teammates included Ciara Grant, Naomi Carroll and Dora Gorman. In her early years, she helped Alexandra College, in 2011 along with Emily Beatty, land the Leinster Schoolgirls’ Senior Cup. In the final they defeated a St. Andrew’s College team that included Gillian Pinder.

She subsequently went on to win a plethora of trophies with UCD – eight on the national stage – captaining them to a treble in 2017. That season, she scored the winner in the Irish Senior Cup final as UCD defeated Cork Harlequin. She was also captain a year later when UCD defeated Pegasus 4–0 to retain the cup.

Her UCD career was briefly punctuated by a year with the Northeastern Huskies. While in Boston, Duke was watching the 2013 marathon when the event was interrupted by a terrorist attack. She was standing close to the spot where the second bomb went off but had left the area just half an hour before the explosions.

Following her performances with Ireland at the 2018 Women’s Hockey World Cup, Duke announced she would be joining Düsseldorfer Hockey Club for the 2018–19 season and she reached the German final four playoffs with the club.

For Ireland, Duke represented in green at Under-16, Under-18 and Under-21 levels  before making her senior debut against Scotland in June 2013. Duke was a member of the Ireland team that won the 2015 Women’s EuroHockey Championship II, defeating the Czech Republic 5–0 in the final.

This year, Duke was initially named as a travelling reserve for the EuroHockey Championships but stepped into the main panel when Sarah Torrans was ruled out through injury. She went on to score the official “Goal of the Tournament” for her strike against England.